This notebook contains literate code, i.e. brief fragments of Python surrounded by descriptive text. Please use the same format when submitting your answers. Begin your response to each problem with a  ## Solution   markdown cell. Since this exercise includes a number of supplementary discussions, questions are explicitly marked with a TODO marker.

Please keep in mind that homework assignments must be done individually.

The following Yes/No and paper & pencil questions are meant to check your comprehension of lecture and reading material in addition to linear algebra prerequisites.

As in the last assignment we'll begin by importing essential NumPy/SciPy/Matplotlib components that are needed to complete the exercises. The first two lines instruct Matplotlib to embed figures directly into the notebook and render them in sufficient quality for modern high-DPI ("retina") displays.

You will get to run numerical algorithms on high resolution images in this homework, which will involve a fair amount of plotting and visualization of intermediate results. The Matplotlib default settings unfortunately cause figures to be shown at a tiny resolution, so this next line changes the settings to make all figures large by default. The second line ensures low resolution images are rendered with sharp pixel contours instead of a blurry approximation, which will be helpful later on.

Problem 1: Fitting a function to data, a.k.a. Regression Analysis (15 points)¶

The following plot visualizes the total population of the Canton Vaud over a period of 35 years from 1979 to 2014.

In this exercise, you will apply the tools of linear regression analysis and and linear least squares to fit an approximate parametric model to this dataset.

Virtually any computer device in existence today is equipped with at least one digital camera; with over 5 billion users of digital photography, this technology has now fully permeated our society. In this exercise, you will get to build your own image processing pipeline that applies color space transformations to turn the raw data measured by a digital camera into a usable image that can be viewed on a computer screen. In the following, we will explain what this means, and how to implement the associated steps using tools from numerical linear algebra. But first, we shall begin with a brief review of the process that takes place when taking a picture.

A digital camera uses an assembly of optical elements to focus the incident light onto a silicon sensor that consists of millions of tiny regions arranged in a regular grid. The silicon is sensitive to light, and each small region on the sensor (generally referred to as a pixel) measures the portion of light that falls on it. 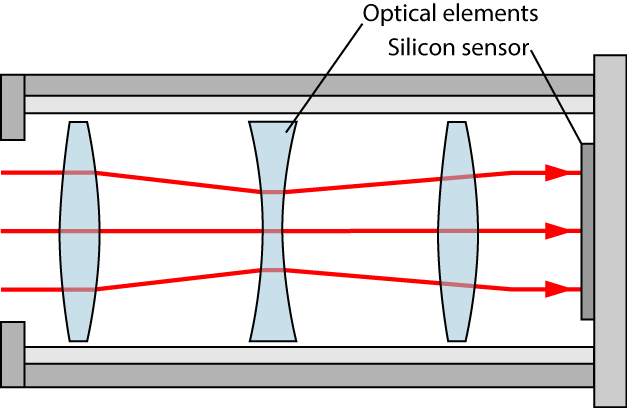 When no picture is being taken, the sensor is either inactive or used for a live preview (as in mobile phones or smaller cameras). When the actual photograph is taken, it is important to be able to control the precise amount of time during which light is collected by the sensor. This is realized by means of the shutter, a small mechanical or electronic barrier that prevents light from reaching the sensor. The shutter can open and close very quickly, in about 1/4000th of a second.

When taking a picture, the camera perform a sequence of steps in rapid succession: first, the shutter opens, allowing light to reach the pixels on the sensor. For a brief duration (known as the exposure time), the sensor collects all light that reaches the surface. To be able to distinguish colors, each pixel on the sensor is covered with a tiny filter that will only permit certain wavelengths of light to pass through.

Once the measurement is frozen, the camera proceeds to performs a full readout of the data associated with each pixel (i.e. the "fill height" of each bucket in the illustration above). This data is known as a raw image: a representation of the original sensor data without any additional processing. Raw images play a similar role as negatives in traditional photography: they contain all of the information that is needed to eventually create an image, but they aren't yet usable as an image on their own. Converting a raw image into an actual image entails decoding the information on the sensor and translating this data into displayable red/green/blue intensities that "make sense" on a computer screen, and which reproduce the colors that a human would have observed in the moment when the photo was taken.

Analogous to classical photography, the process of turning the raw sensor data into a usable image is referred to as "developing" the image. Cell phone cameras generally perform this step automatically without user intervention. On the other hand, most professional cameras allow the user to choose between developing the image automatically within the camera or storing undeveloped raw images that can be manually developed by the user later on. The latter has become extremely popular, since raw image contain more information than would be available in a fully processed image (such as a JPEG image). For instance, JPEG files may not be able to represent the full range of colors perceived by the camera's sensor, and the lossy compression implies that there is some loss of image quality. A range of commercial (Adobe Photoshop, Lightroom, ..) and free (RawTherapee, darktable, ..) software tools can be used to develop raw image with full artistic control over the output.

Developing an image can be an arbitrarily complex process, though the simplest version can be reduced to only four steps:

We will now walk through each of these steps (slightly out of order):

Begin by downloading the following file (~72 megabytes), which contains the raw sensor data of two photographs taken with a Canon 6D camera: http://rgl.s3.eu-central-1.amazonaws.com/media/uploads/wjakob/2016/10/20/lacleman_raw.npz.

Place the file into the same directory as the CS328 - Homework 2.ipynb file so that it is easy to load from Python. The following set of commands then import the file and extract all relevant data (this will take a few seconds):

The file contains three 2D NumPy arrays—two high resolution photographs (tree and whitebal) with approximately 20 million pixels each, and a mysterious small array (patches_target) that we'll need later on. We will only focus on the tree array for now.

Let's try to display one of the raw images using Matplotlib!